You are here: Home / Coffees / Types of Coffee Grinders (& What They Do Best) 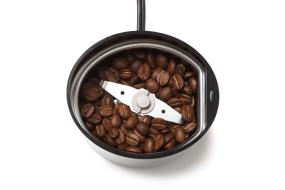 Coffee starts to go stale within two hours of grinding, so if you are buying coffee that comes ground, or grinding at the store, you are giving up all the flavor before you even brew up the first pot. Grinding at home on an as-needed basis keeps your coffee as fresh and flavorful as it can possibly be, and produces coffee that is fresher, smoother and overall tastier.

There are a few different types of coffee grinders that work in different ways, some more effective for some types of grinds than others. Knowing the difference between grinder types, and what each type of grinder does best, helps ensure that you get the perfect grind every time you brew.

The least expensive type of coffee grinder is also the least effective. It will cut coffee beans into pieces, sure, but the nature of the grinder means those pieces will be many different sizes, which can result in a less than stellar brew.

A blade grinder looks much like a food processor. It has blades that spin and hack to chop the beans into bits. Just like with a food processor, the longer you run the grinder, the smaller those bits become. Generally speaking, 15 to 25 seconds of grinding will produce a coffee just right for automatic drip coffee.

It is nearly impossible to get uniform grounds with a blade grinder unless you run it for several minutes. By that point, due to the fast whirring of the blades against the beans, the coffee may taste burned, and the grind will be no more than a powder that will clog most types of coffee makers.

In lieu of plates, a burr grinder has two discs that rub together to perform the cutting. The beans are smashed between the plates, and changing the coarseness setting on the grinder moves the plates closer together or further apart, resulting in a finder or coarser grinder, respectively. Due to this, the grind is far more consistent.

Keep in mind that a smaller, more consistent grind means it takes longer for water to pass through, so if you’re used to a coarser grind, you’ll likely have to adjust the amount of coffee you use to get the taste just right.

To make matters just a little more complicated, there are a couple of different types of burr grinder. In the wheel burr, the discs that do the cutting are flat. These discs in these grinders spin faster, which gets the job done more quickly, but also sacrifices flavor and makes the grinder run loud. On the upside, they are less expensive.

In a conical burr, the discs are shaped like a cone. They spin more slowly, which makes the machine quieter and preserves more of the flavor of the beans. On the downside, they are more expensive.

For flavor purists, there is no competition. The conical burr is worth the extra expense. If you are looking for a quality grind that upholds flavor at a cheaper price, though, the flat burr will certainly get the job done.

Most manual grinders are burr grinders without the automatic function. They create consistent grinds, while providing you a simultaneous arm workout, and, since they have fewer moving parts than electric grinders, they typically hold up longer.

A manual coffee grinder runs on your determination to drink a damn fine cup of coffee. You turn the crank, and, like a burr grinder, the plates inside spin against each other to create a consistent grind.

The downside to manual grinders is they generally have only one setting – coarse. This make these grinders best for use with drip coffee makers. If you’re down with the drip, though, a crank coffee grinder is the most inexpensive burr you’re likely to find.

If you’ve ever ground coffee at home, you’ve experienced that lovely waft that comes right after the grind, that “fresh from the bean” smell and flavor. While some grinders are better than others, it’s all right if it comes down to ease of use and budget in the end. Grinding at home creates fresher, more robust flavor than buying pre-ground coffee, whichever way you cut it.