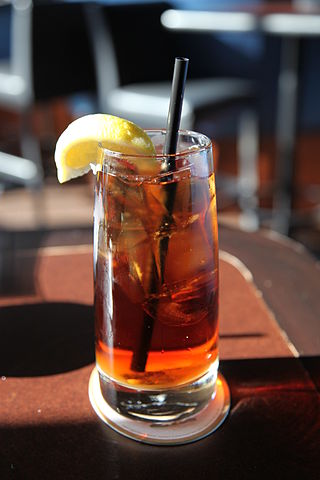 When it is hot outside and you are really thirsty, then nothing beats a refreshing glass of iced tea. And if you’re from the South like me, then when that tea hits your lips it will be of the sugary-sweet variety. I tell ya, we make a LOT of iced tea in my house. If I had to guess, I’d say that we go through a pitcher of tea every 1.5 days. But when we all get together at my mama’s for a holiday or other family gathering, then you better believe that we need more tea than that! I swear one Fourth of July that we went through five pitchers of iced tea on that one day.

When it comes to making good iced tea, I honestly think that the old school way of just boiling some water in a sauce pan on the stove and then letting some tea bags steep in it is the very best ways to make your tea. It’s how my grandma still makes it. And when I have time on my hands, that is how I make it. But, when you’re working full-time, trying to raise a family and keep the house somewhat clean, you ain’t got all that time to deal with steeping tea. Right? Well, that is why I started using an iced tea machine a while back. I kept seeing them at my local Wal-Mart and wondered what all the fuss was about. So, I decided to learn a bit more about ’em.

Before You Buy A Tea Maker

Since I know that my Wal-Mart doesn’t always carry the best stuff, I decided to look online and compare the different iced tea makers to see what I could learn about them. After a bit of comparing, I learned that for the most part, they all work in the same basic way.

Of course, there are some differences between the machines. That means that some of them are better for my needs while others might be better for your needs. It’s all about what you need from your iced tea making machine.

Things that you will want to consider when comparing electric iced tea makers:

As you can see, I take my iced tea making very seriously and I have a long list of needs and wants when it comes to an electric iced tea maker. Armed with my list of things to consider, I narrowed it down to just three different models of electric tea makers. Then, I tried each of them to see which best meets my needs. 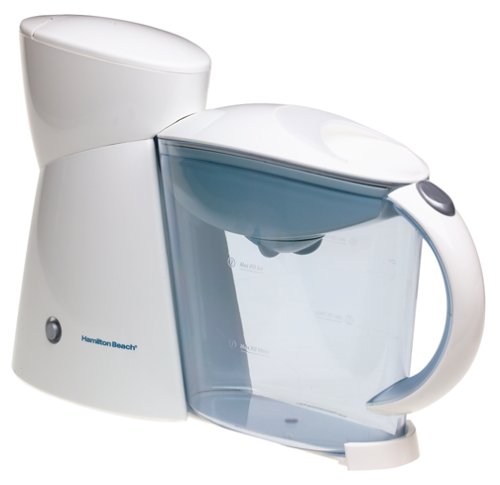 I found this electric iced tea machine online and thought it would look nice next to the Brita pitcher in my fridge since they have a similar look. Normally, I prefer something in a stainless steel to match my coffee maker, but this is a decent second choice.

I already own a Hamilton Beach blender, so I knew that this was going to be a decent quality machine. Though I wasn’t sure if 2-quarts would be a large enough pitcher. You see, my ideal scenario is to be able to run one of these on holidays to keep everyone stocked in iced tea.

This tea maker is priced higher than I would prefer to pay. Still, I decided to give it a try in my quest for the best electric iced tea maker machine.

What I did not like about this one is that the pitcher is not dishwasher safe. Also, the pitcher gives off a strong plastic smell right out of the box and it does not go away. As a result, it left the tea that I made tasting a little bit like plastic. Needless to say, it wasn’t the best tea, but any tea is better than none at all, right?

This one also got some water on the counter each time it is run, which means taking time out to clean it up. It doesn’t take long but that starts to add up over time. And, if you prefer loose tea, I heard from another owner that you can end up with the loose tea actually in your pitcher.

There are a lot of things that I like about this one though. The design is slim, which means it doesn’t take up a lot of space and that’s nice. It also meets my requirements of having an auto shut-off, a brew strength selector setting and a paperless filter. And probably best of all, a full pitcher of tea is done in under 10 minutes!

Bottom line: this is a nice machine, but not the best iced tea maker for my budget or my tea making needs 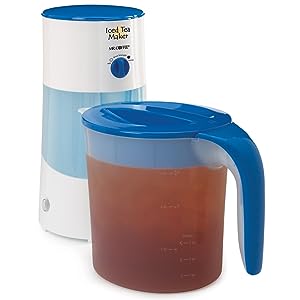 But, it’s really ugly, right? I mean, this is not something that you would want to leave sitting out on your counter. At least not me, but I was super tempted by the 3-quart capacity of that pitcher, so I picked it up at my Wal-Mart. You can also find it online at places like Amazon.

What I did not like about this one, other than the way that it looks, is that it leaks quite a bit. I also learned that if you do not remember to put ice in it before you brew the tea, then the pitcher is so flimsy that it will actually warp from the heat of the water! I could not believe that when it happened.

Though it does have a filter basket, it doesn’t work all that well and results in needing to use a paper coffee filter. That kind of defeats the purpose of the filter, right?

And when I was learning about this tea maker, I came across several people who mentioned that the pitcher actually cracks so that you can’t use it after a few months time. This seems to be a common problem. So, I returned this one pretty much immediately.

That being said, I did like that it has a cheap price and makes a large amount of tea at once. It also meets my requirements of an auto shut-off, being dishwasher safe and brew strength selector. But, it also takes up a lot of space thanks to that super size pitcher.

Bottom line: In my opinion and experience, it’s the cheapest option, but you also get what you pay for, though I do enjoy the large tea pitcher – but it’s not for me in the end. 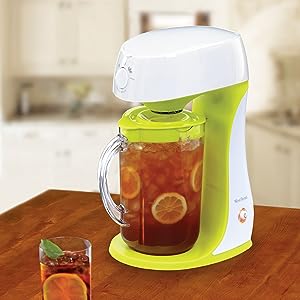 I have to admit, when I first saw this one online I got a little bit giddy about how nice it looks when it has such a low price. I was secretly hoping that it would be the best choice for me just based on its design.

This electric tea maker meets so many of my requirements, so let me first tell you what I don’t like about it.

Sometimes, the sugar doesn’t fully dissolve when you make the tea. This isn’t really a big deal as long as I remember to stir it before pouring it. It has a drip tray, which is a nice feature, but it’s also just something else that needs to be cleaned and I am notoriously lazy! Also, the size is a bit large for my cabinets – it is quite tall so it can’t be placed where you have short cabinets above the counter.

What I do like is that it comes with a 2.75 quart pitcher, which is almost as big as the Mr. Coffee one. It is also easy to use your own pitcher with this machine. It features a dedicated sugar compartment, as well as a brew strength setting, auto shut-off and reusable filter. It also works well with loose leaf teas and it fills the pitcher quickly.

Bottom line: this the best electric iced tea maker for the money – it’s the one that I use and that I recommend to all my friends. Plus, it looks great on the counter.

There are plenty of other electric iced tea makers that you can choose from if you do not like any of these, but I do highly suggest that you consider the West Bend model and it truly does make a good pitcher of iced tea in a hurry.