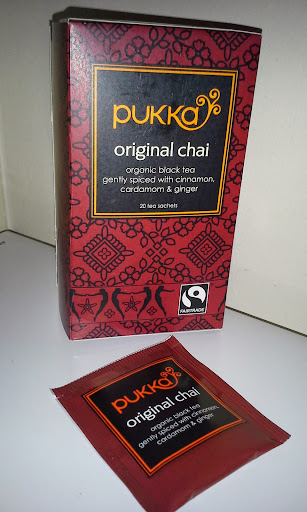 Chai tea is probably one of my favorite types of hot tea to drink. There is just something so cozy and warming about having a cup of chai with a little milk and sugar.

Of course, finding a good chai tea blend is not always the easiest thing to do. Many blends include black pepper, which is not really the way that I like my chai. I prefer it to have a lot of warming spices in it like cinnamon, which is why I chose this pukka blend instead of the other organic blends at the store (they all had black pepper in them).

As you can see in the photo, the primary ingredients in the Pukka original chai organic tea blend include cinnamon, ginger, cardamom and black tea. This is exactly the type of ingredient list that I like to see in my chai.

When I made the first cup, I was a bit surprised by how overpowering the cinnamon is in this one. The flavor was actually a bit closer to regular cinnamon tea, though it was still quite tasty.

Once I added in a little sugar and milk though, it more closely resembled the chair tea taste that I was looking for all along.

This blend may actually be my new favorite when it comes to chai as Numi was previously my go-to brand for this tea type.